Last week we released another Unison alpha milestone. This release has anumber of bugfixes and performance improvements.🌈⭐️

It's exciting to see Unison gradually coming together, but even more exciting has been seeing people writing and publishing Unison code. I've been pretty busy reviewing pull requests to theUnison base libraries,and there's already a lot of useful stuff there. Thanks to everyone who has contributed so far!

If you've been putting off trying out Unison because you think getting into a new language might be a lot of work and involve a lot of setup, then I've got good news for you: Unison requires almost no setup. You can just start coding.

To get going with Unison, you can go through thethree minute quickstart guide.It only has three steps.

I can now just start writing Unison code in any file in the directory from which I starteducm,as long as that file's name ends in.u.I open up a filescratch.uwithvim(my favorite editor), and write my first definition, the obligatoryfactorialfunction:

If I save my scratch file, Unison responds with:

It's telling me thatfactorialis a function that takes aNat(a 64-bit unsigned integer), and returns anotherNat.I can add this function to my codebase: 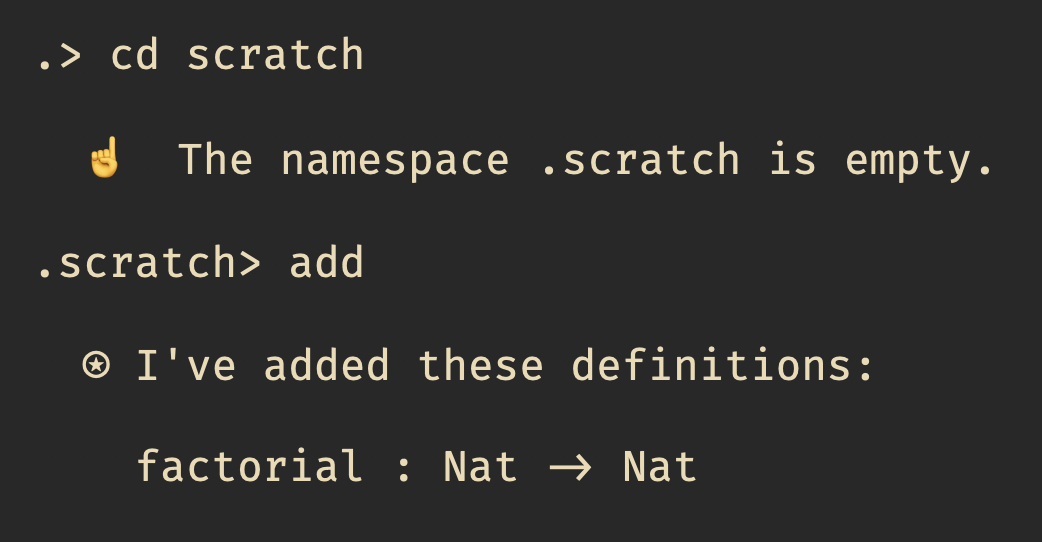 I can try out my function right in the scratch file by adding a "watch expression", which is any line that starts with>(or an indentation block where the first line starts with>).

Unison reponds by evaluating my expression:

Looking around the base library

Thebaselibrary is already full of good stuff, with new things being added almost daily now. To see what's here, I can browse with UCM. If I dolist .base(orls .base),I get a long list. I cancdinto any namespace and look around withls.

In the definition offactorialabove, I was usingfoldrandrange.If I ask UCM tofind range,it responds with everything it knows about withrangein the name: 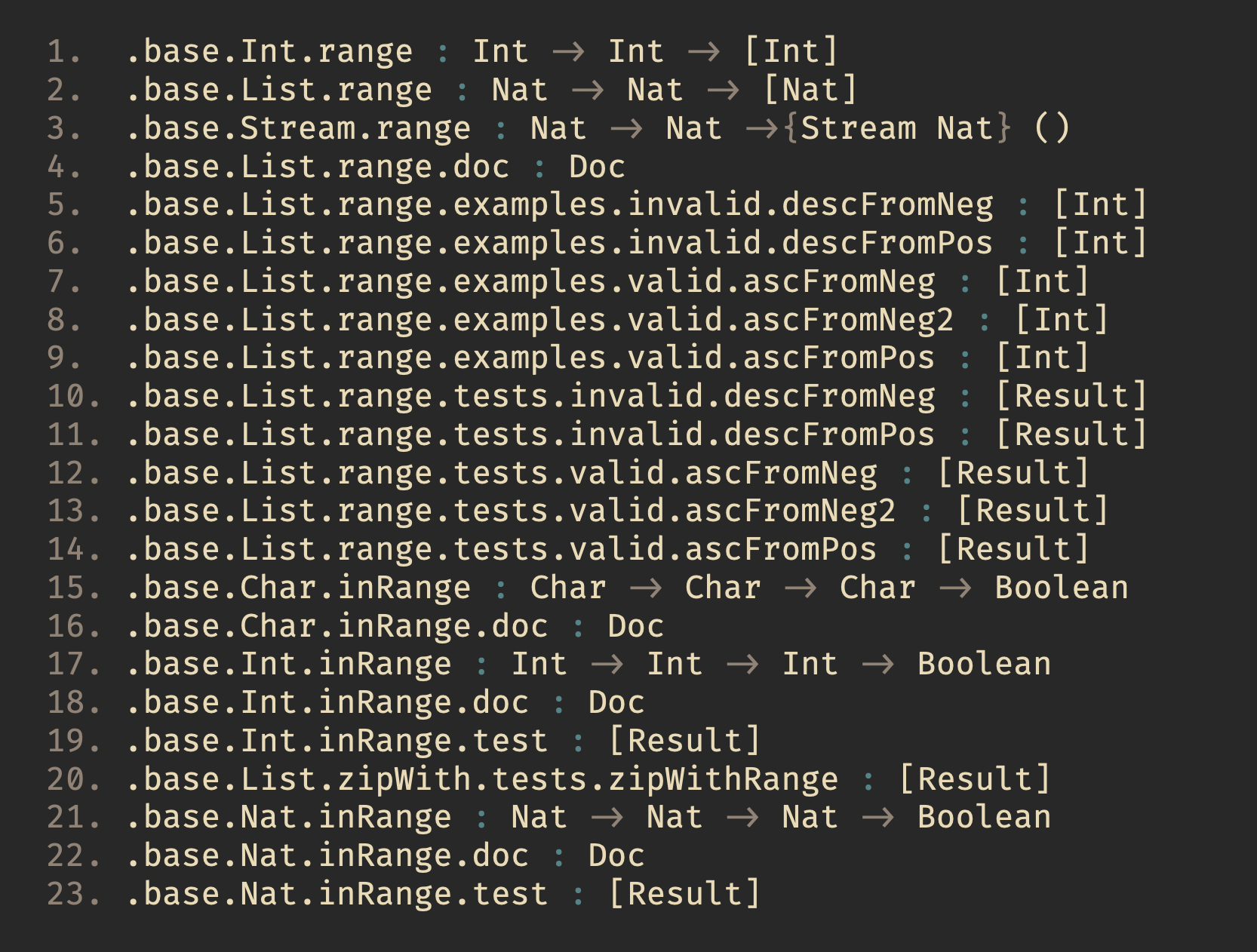 The second entry is the function I was using,List.range.I can ask for its definition either by name or by using the number from the list that UCM produced: 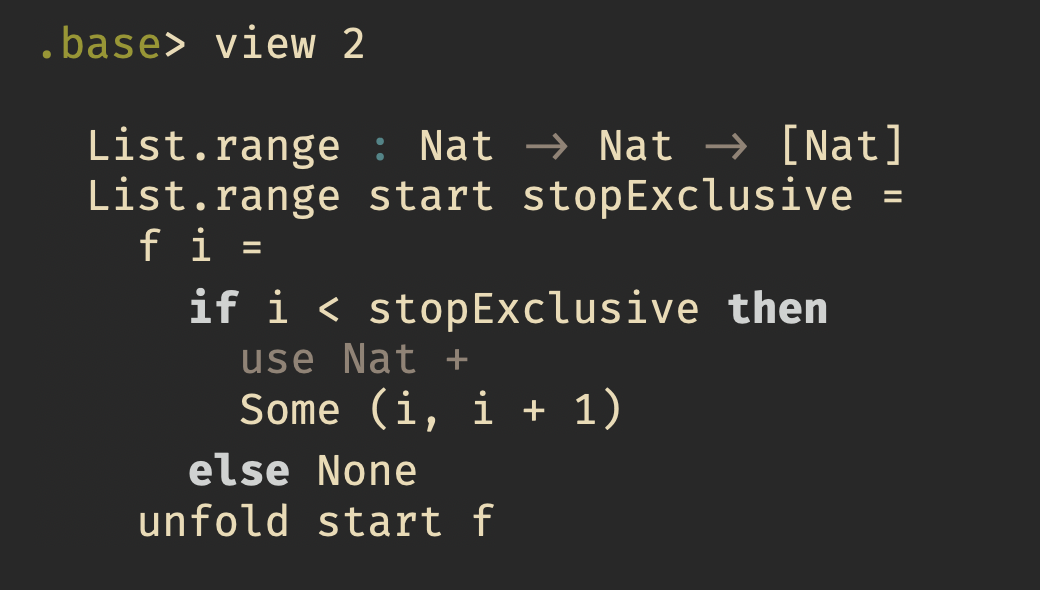 Thedocscommand (tryhelp docs)shows me the documentation for a given function or type, if it has any docs associated with it. 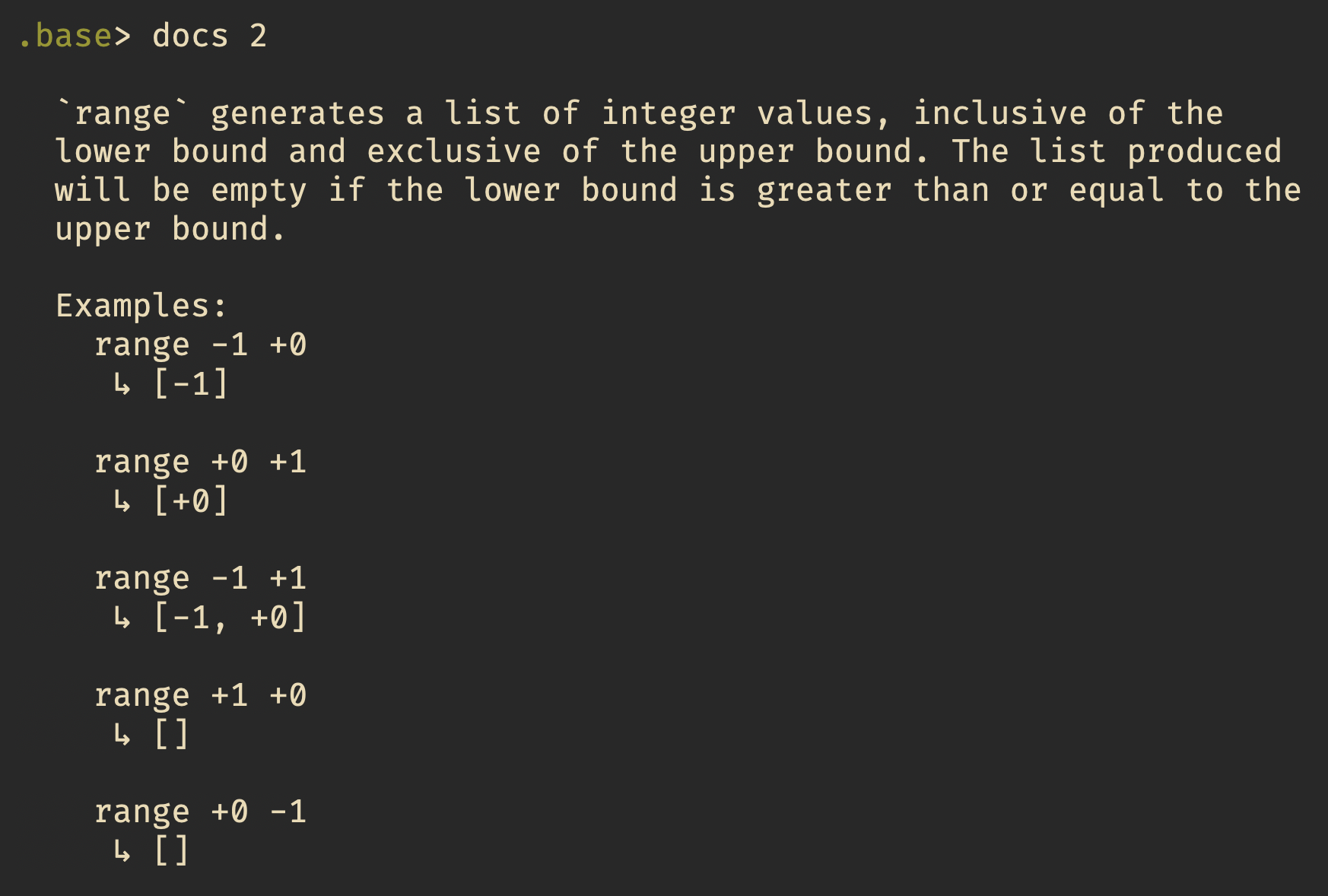 Let's have a look at a third-party library

Looking at thelist of libraries that people have already made,I want to pick one, kind of at random, and just play with it to give you a feel for what it's like to consume libraries in Unison. And speaking of random, it looks like one of them isa random number generator that uses a Mersenne twister,written by Chris Gibbs. Let's try that out.

Chris has supplied handy install instructions, so let's just do as he says:

Lots of stuff scrolls by, and Chris's library is now in my codebase. The namespaceexternal.unison_random_mersenne.v1is kind of long for my taste, so I'm just going to move it underlib.rng.

I'm using tab completion for this instead of typing out the whole thing. Icd lib.rngand look around.

Looks like there's aREADME,which is a Unison value of typeDoc.I can ask UCM to render anyDocwith thedisplaycommand. In theREADMEthere's a usage example which shows me how to generate some random numbers.

I put a triple dash---,a "fold", on a line at the top of myscratch.ufile, which tells Unison to ignore everything below. I've already addedfactorialto my codebase, so I don't need to think about that anymore. It goes below the fold. Above the fold, I put an expression to generate a single random number between 0 and 10 which I got from the README.

OK, soprovidegenerates numbers by providing aStore Stateability, whereStateis the Mersenne twister's internal state. TheNat32is the seed, and thisAsk nthing is a computation that can ask for a randomn(which in my case is going to beNat).

Looks like this library puts a lot of its guts on display, so I'm going to try to write a more abstract interface for it. What I really want for a random number generator ability is something like this:

I can write a (recursive) handler for this ability that uses the Mersenne twister:

Great! So now I can request a randomNatjust by sayingnextNat,and I can handle that request with `mersenneRNG`by providing a seed. But sometimes I don't want to provide a seed, and I just want to generate a random number as anIOeffect. Let's try to feed it the system time.

Skimming thedocsfor these, I see thattruncate32is probably the thing I want. It truncates the high 32 bits, leaving me with just the least significant bits of the clock. So I write:

And finally I use themersenneRNGhandler from earlier:

An example of using this in a program might be:

Let's try to run it. UCM provides aruncommand which provide theIOability to something of a type like'{IO} a.

Great! I got a random number using the system clock time as a seed. Maybe at some point I'llsend a pull requestto Chris so he can incorporate some of this into his library.

I hope this gives you a taste of what it's like to work in Unison with the current alpha release, and that this encourages you to try it out and maybe contribute some libraries. Remember, it's early days yet, so little things you build now could make a big impact on the Unison community for the future.